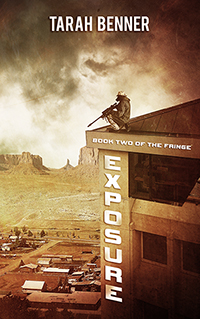 It’s been way too long. I’ve been super busy lately putting the finishing touches on book two of The Fringe. It’s called Exposure, and I’m excited to announce that I plan to release it by March 8.

I appreciate your patience and all the kind emails you’ve been sending me. I’d hoped to release the book sooner, but this one is much longer than book one, which is why it took a little extra time.

If my proofreader finishes early, I might publish a few days ahead of schedule, so make sure you sign up for my email list if you haven’t already to be the first to know. I promise I’ll only email you about things you really want to know, such as new book releases and special perks for my most loyal readers.

I’d like to give a shoutout to my fabulous cover designer, Slobodan Cedic, for his truly awesome work on the new cover. If you’re a big fan of The Fringe, you’ll also want to order books one and two in print when they’re released because the print covers are just gorgeous. Updates on that to come.

If you’re a fan of The Fringe and just need something to get you through the next week before Exposure comes out, check out my other series. Book one, The Defectors, is free on Amazon, Barnes and Noble, iBooks, Google Play, and Kobo.